Love is real and mighty.

In Honor of the Legacy of Jacques Roumain

and In Honor of the Haitian Poor 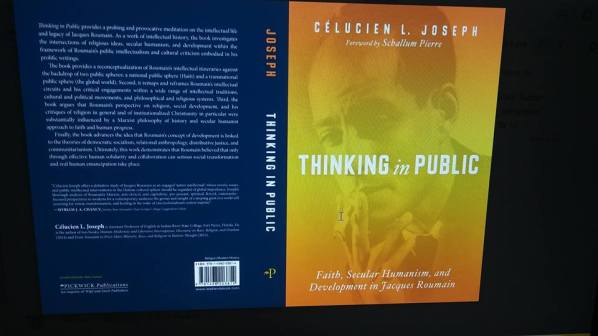 I will not take a dime or any royalty from the publisher (Wipf and Sock) for my new book on Jacques Roumain: “Thinking in Public: Faith, Secular Humanism, and Development in Jacques Roumain” (May 2017).

I would like to honor the legacy of Jacques Roumain in three ways: (1) by writing a book about his life and ideas, which I have already done, (2) by emphasizing the importance of his ideas and legacy for Haitian democracy and Social Uplift programs in Haiti, and (3) to give all the royalties earned from this book to improve the literacy program and build a trade school in Port-Margot, Haiti.

After Jacques Roumain moved back to Haiti from Europe, he would spend the rest of his life fighting and protesting against the forces (both internal and external powers) that exploited Haitian workers and the poor in Haiti, and by  working on behalf of Haiti’s underclass, peasants, and the economically-disadvantaged in order that their social and economic conditions could be improved, and their children could have a promising future. 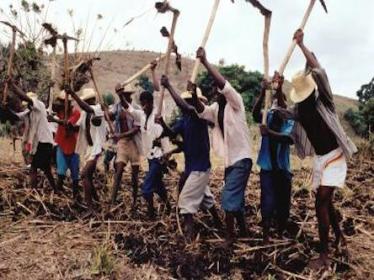 *Hence, when you order my new book on Jacques Roumain, I can assure you your contribution will help accomplish the stated goals or objectives. To me, to honor the legacy of Jacques Roumain is to be sensitive to the plight of the Haitian poor, to walk in solidarity with the peasant class and the disfranchised in the Haitian society, and to serve them and invest our talents, skills and money to improve the life and future of the least among us in the Haitian society.

E. P. Sanders on Paul’s views about Sex and Homosexual Activity (Part 1)
I have always wanted how E. P. Sanders interprets the controversial passage of Romans 1: 25-7. In my reading of his new book, “Paul: Apostle’s Life, Letters and Thought” (Fortress Press, 2015), Sanders writes the following about Paul’s understanding of human sexuality and sexual relations:
“The most striking aspect of gentile sexual immorality was the ‘exchange’ of the ‘natural’ sexual connection between male and female for same-sex relationships (Rom. 1:25-7). ‘Natural’ sexual relations are those that could lead to conception.
For the modern reader, the elements of Paul’s vice lists that most require explanation are those that point to homosexual activity…If the statement in Rom. 1:26, that gentle women ‘exchange natural intercourse for unnatural,’ stood alone, this might mean that women performed anal or oral sex with men, rather than vaginal, but the following verse indicates that Paul had homosexual activity in mind:
“in the same way also the men, giving up natural intercourse with women, were consumed with passion for another” (1:27).
Male homosexuality is also condemned in 1 Cor. 6:9, where Paul refers to pornoi, which we have already seen can appropriately be translated “the sexual immoral,” and to malakoi and arsenokoitai, which the NRSV translates “male prostitutes and sodomites.”
Pornoi (“the sexually immoral”): all those people of whose sexual behavior Paul disapproves
Malakoi (“catamites”: males who are the passive recipients of anal intercourse
Arsenokoitai: males who penetrate catamites” —Sanders, “Paul,” 343-4)

*This invitation is in English.

Racism and racial/racist ideologies  are not  distractions to the Gospel; they are indeed Gospel issues. The problem of race in modernity and post-modernity is a profound theological conundrum.

If the message and messenger of the Gospel can’t heal the deep racial wound of American Evangelicalism and American society, then they’re not relevant to the modern life and should be rejected. If the messenger segregates Gospel issues and race issues, there lies a problem with the messenger’s understanding of the telos of the Gospel, which is arguable reconciliation. Reconciliation has both horizontal and vertical aspects. The Gospel provides the remedy for individuals to be reconciled with God; this act of reconciliation urges individuals to be reconciled with each other.

I’m deeply saddened by this report below:

You are cordially invited to the First Haitian Heritage Symposium that will take place on May 27, 2017 at the African American Research Museum and Library in Ft. Lauderdale, FL. 11am-5pm.

Circulate widely!!!
Please Share this flyer with your friends!

1. Feminism does not mean the feminist has to hide her weaknesses before men. To have weakness is inherent to both men and women; in other words, to be human means to be weak. The human nature necessitates that we experience weakness as part of the human experience and reality.

We learn, grow, and mature through our weaknesses, and can become more fulfilled as we accept weaknesses as shapers of our feminist identity.

In the same line of thought, as part of the social construction project of masculinity, as an early age, little boys are trained and men correspondingly are taught to devoid themselves of any public emotion or feminist tendencies—whatever that means. We teach men to be tough, brave, emotionless, and insensitive to pain and suffering. This is nothing but a defective form of masculinity.

2. Feminism is not the antithesis of motherhood or should it be equivalent to childlessness. There should not be a tension between motherhood and feminist self-agency and self-expression. A mother can be a fierce feminist just like a feminist can be a nurturing, loving, and relational mother.

4. Feminism does not mean independence and autonomy from men in the same way masculinity should convey male autonomy and independence from women. Men and women become more effective in their pursuits and endeavors when they complement each other and live in relation to each other.

True feminism just like authentic masculinity is a life of interconnectedness, mutual reciprocity, and interdependence. True feminism (as masculinity should be) is both an egalitarian and complementarian conviction and sets of practices.

5. Feminism is not the antithesis of masculinity. Masculinity is not equivalent to patriarchy nor should manhood be a hindrance to feminist expression and sensibility. To be a feminist does not necessarily mean one has to get involved in constant battles with men in order to display courage and resistance. Some men in society are also victims of the patriarchal system. (Patriarchy is not a monolithic order nor is it a unified system. There are different forms of patriarchy.) However, women suffer more from this male-rule society, and men in general benefit from our patriarchal order.

By contrast, men and women need to work together to deracinate systemic and structural oppression and any form (sexual, verbal, physical, emotional, etc.) of violence that engender tension between the two sexes or the forces that foster enmity between the male and female gender.

* I’m still trying to frame my thought around the subject of feminism and its complexity as both a theoretical framework and sets of practices. I also know my five theses are grounded on a heterosexual worldview. That does not mean I have excluded the LGBTQ community in this discourse nor is it intentional to undermine the human dignity that is inherent to the gay, the lesbian, the transgender or the queer individual.

Moreover, I confess my own articulation of these theses are products of my own patriarchal practice, ideology, and conviction. I’m on this journey to learn, to be changed, and to alter my ideas or modify my perspective (s) if deems necessary. Hence, I’m asking my Feminist friends and other critics to be patient with me on this journey.

• In Other Worlds: Essays in Cultural Criticism, and The Postcolonial Critic: Interviews, Strategies, Dialogue by Gayatri Spivak
• Gender Trouble, and the Psychic of Power by Judith Butler
• The Reproduction of Mothering by Nancy Chodorow
• The Dialectic of Sex by Schulamith Firestone
• The Feminine Mystique by Betty Friedan
• Psychoanalysis and Feminism by Juliet Mitchell
• The Politics of Reproduction by Mary O’Brien
• Woman, Native, Other: Writing, Postcoloniality and Feminism by T. Minh Ha Trinh
• In a Different Voice: Psychological Theory and Women’s Development by Carol Gilligan
• A Vindication of the Rights of Woman by Mary Wollstonecraft
• The Erotics of Talk: Women’s Writing and Feminist Paradigm by Carla Caplan
• Feminist Postcolonial Theory: A Reader edited by Reina Lewis and Sara Mills

*Also, the literature on Black Womanist and Feminist Hermeneutics—religious, biblical, and theological–is quite substantial and very rich!