Skip to content
HomeMy Review of Benjamin Elijah Mays, Schoolmaster of the Movement: A Biography

My Review of Benjamin Elijah Mays, Schoolmaster of the Movement: A Biography (The University of North Carolina Press, 2012) by Randal Maurice Jelks 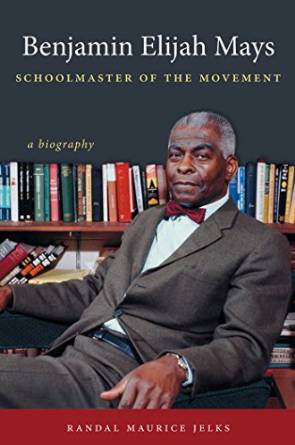 “In this important work, historian Randal Maurice Jelks provides a chronological and intimate account of the person, life, and writings of Benjamin Elijah Mays up until the publication of Mays’s autobiography, Born to Rebel, in 1971. Jelks intelligently investigates the foundations and origins of May’s ideas and worldview. He establishes the connection between Mays’s contributions to the Civil Rights movement and his embrace of Prophetic Christianity and Progressive Protestant Theology, and Ghandi’s nonviolent philosophy and practice and his commitment to peacemaking and racial unity through nonviolent tactics and strategies. These ideas, especially Prophetic Christianity, according to the author, had played a central role in Mays’s activist life to challenge America’s racism, inequality, and racial segregation.
Jelks’s Benjamin Elijah Mays, Schoolmaster of the Movement: A Biography is one of the significant studies on the theologian, activist, and the pioneer of the Civil Rights movement Benjamin Elijah Mays (1894-1984). The author presents Benjamin Elijah Mays as a public servant, an engaging public intellectual-activist and cultural critic, an educator, a theologian, and most importantly the pioneer of the civil rights movement. Yet, Jelks highlights the interconnections between these various roles that Mays played and underscores how each one complemented each other in Mays’s unyielding quest for the idea of a just democratic social order and social justice and equality on behalf of the African American population.
More importantly, Jelks attempts to bridge both the historical and intellectual gaps between Martin Luther King Jr. and Benjamin Elijah Mays, whom King had considered as a father. Current scholarship on the Civil Rights Movement have failed to acknowledge and explore this important dimension. Hence, Jelks’s work filled the gaps by accentuating Mays’ significant role in relationship to this historic event in American history and the black experience. Jelks describes the relationship between Mays and King like father and son (200–211). In many and various ways, he establishes the manifold influence of Mays upon the young King as his spiritual mentor, a leader of the Civil Rights Movement, and King as an intellectual-activist. Jelks remarks, “Mays, as King testified, had been significant in his life and influential in his calling to be a Baptist minister. Mays was also one of the clergy members who listened to his trial sermon and ordained him” (201). In addition, he asserts, “When King decided to attend seminary in 1948, at the age of nineteen, it was Mays who had written a key recommendation on King’s behalf…During King’s doctoral studies at Boston University, his academic inquiry focused on the question of God. King paid homage to Mays by writing a dissertation along similar lines as Mays’s dissertation, comparing the concepts of God in the respective theologies of Edgar Sheffield Brightman and Henry Wieman” (201).
Furthermore, Jelks has brilliantly analyzed the close relationship between Mays’s religious life—his theological training in Liberal theology and Christian progressivism, political theology, and the influence of the Social Gospel of Walter Rauschenbusch at Bates College and then the University of Chicago—and his secular vocation and vision. For the author, Mays was profoundly influenced by “the faith of his mother” (42), which served as a driven force in his understanding of Christian activism and responsibility to society as a whole, the idea of “the just society,” his work on race relations and correspondingly, his relentless fight against anti-black racism, white violence, and public segregation in American society. As the author remarks, “Mays’s formative religious ethics held that everyone was equal in the eyes of God … Mays always held on to his mother’s belief about the equality of persons before God as counter to the racist image he received in the wider society” (44). It is good to inform the reader that previous studies on Mays and the Civil Rights Movement have not made this clear connection between Mays’s religious worldview, social activism, and his fight for racial inclusion, black freedom and civil rights in a country that refuses to affirm black humanity and dignity. From this angle, Jelks’s contribution to Civil Rights scholarship as well as African American religion underscores the significance of faith…”
Source: http://muse.jhu.edu/login?auth=0&type=summary&url=/journals/american_studies/v053/53.4.joseph.html